Prior to European settlement, vast natural marshes covered the Bear River delta, providing an oasis for waterfowl in the midst of the arid Great Basin. Early explorer John C. Fremont witnessed such a large concentration of birds that he wrote in 1843, “The waterfowl made a noise like distant thunder . . . as the whole scene animated with waterfowl.”

Euro-American settlers learned the art of irrigation and began to divert water from the Bear River for agricultural purposes. The 45,000 acres of delta marshes dwindled to 3,000 acres by 1920. Extensive loss of marsh acreage and subsequent concentration of waterfowl flocks into the few remaining wet acres in the Bear River delta set the stage for severe botulism outbreaks. In the early 1900s, waterfowl died by the millions from what was termed locally as “alkali poisoning” (now known as avian botulism). Records show that 2 million birds died in a 1910 outbreak and another 1.5 million died in a 1920 outbreak.

Local citizens recognized that conservation measures needed to be initiated to ensure future hunting opportunities. Sportsmen rallied to the cause and petitioned Congress to establish a wildlife refuge to preserve the Bear River delta marshes.

The Bear River Migratory Bird Refuge was established in 1928 by Presidential Proclamation as “a suitable refuge, feeding and breeding grounds for migratory wild fowl.” Aggressive development began immediately to re-establish delta marshes with construction of over 50 miles of dikes and numerous canals. The completed system created five impoundments of about 5,000 acres each for a total of 25,000 acres of freshwater wetlands.

Disaster struck in 1983 when the Refuge was reduced to ruins by flooding from the Great Salt Lake. One hundred year storm events in two consecutive years accompanied by cool summers raised the lake level and caused Refuge marshes to be inundated with salt water. The rising waters destroyed existing vegetation and Refuge facilities. It was not until 1989 that flood waters receded to the point that restoration of the Refuge could begin. Refuge staff and many dedicated volunteers worked tirelessly to rebuild dikes, roads, and water control structures to allow flushing of the impoundments with fresh river water.

Today, vegetation is growing once again, insect populations have returned with vigor, and birds occur in impressive numbers. The auto tour route has re-opened, and a small pavilion and rest room facility are available for the public. Re-building of the Refuge continues.

Visit our partners at the Bear River Migratory Bird Refuge. 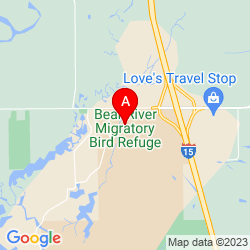